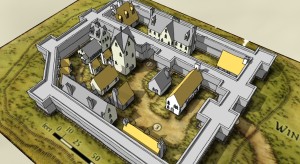 We met our young protagonists when they were just finishing painting a section of the village wall. It had been a long hard day and they decided to try their hand at getting something cold to drink that would wipe their day away. With not having yet reached their feast night as adults… Salvana Wrafton (inn keeper) was not going to sell them any of the frosty beverage they had planned on. Thomas and Chip felt the only sensible thing to do was walk in like they owned the place and walk out with a large cask of ale. That plan didn’t work out too well for them. Mistress Wrafton took the ale and pelted them goo with a large cooking spoon. Didi tried using her stealth to get a cold drink but she was discovered on the way out and after some failed climbing… ended up also running back to camp. Later that night a lizard had an up close and personal experience with Thomas… it could be just chance or a fun prank.
The next day started early in the morning and you found yourselves marching out several leagues on a patrol. Just after starting on your way (back to the village) you were attacked by rust colored lizard humanoids. You found out these creatures were Kobolds and the group found a way to defeat all of them. You found some silver and took the heads of the Kobolds as a bounty. The group also found and distributed the Kobold weapons and armor.
After returning to the village you told your tale to Captain Kelfem and Lord Padraig. Lord Padraig was so pleased that he had your feast night that evening and told you to discover the lair of the kobolds that evening. The group went to Marcus to have the Kobold shields appraised and then went to Valthrun the Prescient to have the magical properties identified. The next morning a little tired and maybe hung over… you marched out and found yourselves at the same ambush point. This time there was a cart set to act as cover for the Kobolds but you defeated them even more easily. You divided up what you could recover from the corpses and then we stopped the game for the evening. We left the players debating if they wanted to make camp and rest or continue on to clear out the Kobold lair.