The “Free Sons of Nerath” have been living the life of regular garrison duty while in Winterhaven. The small village has reached the size of a town due to refugees fleeing the Troll Wars to the south. Surrounding the 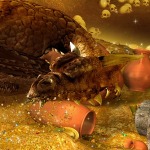 village walls thatch roofed homes have sprung up and an outer earth and wood palisade acts as an outer barrier to protect against raids from Orcs, Ogres and Goblins coming from the Cairngorm Mountains or from the Stonemarch beyond that. Luckily the Orcs haven’t entered the Nentir Vale in the numbers that once decimated the Vale since the day the a dragon moved into the mountain and effectively stopped their pillaging in large numbers around one hundred years ago. The dragon is still rumored to be sleeping in the mountain resting on a pile of treasure or at least that is how the story goes. 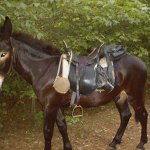 While on garrison duty the company has been assisting in building the palisade, digging ditches and going on patrol for raiding parties. You have even had the chance to find a new recruit. The patrols have taken the company several miles outside of Winterhaven and you all have become familiar with the rangers who patrol the foothills on the Cairngorm Montains and others who live outside of the village proper in their own steadings. The company has also been rewarded with “War Mules” that they can use as mounts or pack animals as they wish. In my setting a War Mule is a Draft Mule (combination of a large horse and donkey) that has been exposed to blood and load noises so that it will not spook in a battle. War Mules are known for strength, endurance and being easy to care for.

You have settled into life in the village. Work has become routine and regular pay and ale are nice. The company lives in an old thatched barn has small rooms partitioned off for each of you and your animals live on the other end. You wake one morning to find that Claw has been murdered in a very odd way. Someone has performed a ritual to cut off his bodies connection to the Raven Queen which has ended his ability to reanimate it. No one crosses the company and lives. After some investigation you find some kobold tracks and follow them back to the foothills but lose them along the way. You send back a message to Lord  Padraig of where you are looking and then head out to see if some of the rangers have any information to lead you in the right direction.

After heading to the nearest ranger outpost you find a young ranger named Will. Will has tells you about some kobolds they have been tracking and the potential site of the lair. The rangers have been tracking them but they haven’t had a chance to call for assistance in clearing out the cave.

So you of course charge off to kill them yourselves. The cave was easy to find you have killed the first two groups in a small grouping of caves. There are a few more caves to go before you believe your revenge is complete but after interrogating a kobold you find that they were hired by a goblin named Iron Tooth who has taken up residence in Shadowfell Keep. When you tried to question him further about the other kobolds he started biting at your ankles, at which time you stomped his head in.