I thought I would give a quick update on my home server for my fellow Linux geeks. 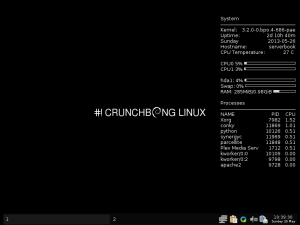 I currently have it running Crunchbang Linux. If you are unfamiliar with Crunchbang it is a low resource Linux Distribution based on Debian. I chose Crunchbang because of how much I like Openbox as a low resource window manager and Cruchbang comes with Openbox configured nicely. It’s much quicker to use Crunchbang as a base as opposed to trying to configure Debian to pretty much the same way.

One of the primary purposes that I use the server for is to act as a home webserver for my wife’s blog SarahDarr.org and my blog here at PaulDarr.org. The software I use to support the blog is Apache webserver, MySQL database and WordPress.

Another use I have for my home server is to act as a media and file server. For media I run Plex, which allows me to stream my music, home movies and DVD copies to my Roku boxes and Android Smartphone. I already had several Roku boxes and Plex is currently one of the best ways to stream media to them. As a file server I just connect using SFTP and do manual backups of my data.

Yet another duty for my home server is to act as a print server. That’s taken care of using CUPS and the Chromium web browser. The use of CUPS is a no brainer but some of you might be wondering why I’m using a web browser. Both Chrome and Chromium support Google Cloud Print.  Google Cloud Print enables my wife to print from her Chromebook and me from my Android devices. I don’t run Chromium all the time but it does have a service running for cloud print. 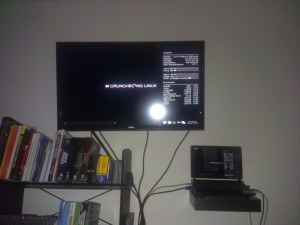 On the hardware end of things my home server is running on an Acer Aspire One D255 Netbook. I upgraded my laptop in 2011 and I had this sitting around as a spare.  The D255 has a 1.6 GHz Atom processor, 1 GB RAM and 160 GB hard drive. I have an external 320 GB hard drive connected for additional storage. I have the laptop connected to the 32inch TV in the room for extra eye candy and the laptop is suspended on a shelf. As a father of a soon to be 2 year old son it’s good to keep the server out of his reach.

To connect with a keyboard and mouse I use Synergy to use my desktops mouse and keyboard with the Netbook.

So far the Netbook does a surprisingly good job as a multi-role home server. Even with all the extra programs I have running it uses less that 300 MB of RAM while in it’s regular use. Overall I would say I am pretty happy with my hardware and software setup. The only addition I have planned is to automatically sync the backups from my desktop.

8 thoughts on “My Crunchbang home server”