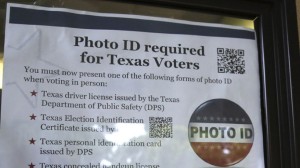 Last July I wrote about the changes with the voter ID laws in Texas and how to prepare for them. Yesterday I had the opportunity to vote on several propositions on the ballot. I figure that due to low voter turn out my vote is worth more on these elections and I try to make a special effort to research the initiatives on the ballot and cast my vote.

This year to vote I had to show my Texas drivers license. It actually wasn’t a completely pain free route for me. You see on my voter registration I am listed by my full name Paul Joseph Darr Jr. On my drivers license I only have Paul Joseph Darr listed. At the time I received my license the Department of Public Safety official declined to place “Jr” on my license. He said that they don’t do that and while I figured it was B.S. there was no way to really make him add it on at the time. I have a feeling this could cause me some issues in the future. There are three people by the name of Paul Darr living in San Antonio. There is myself, my son and some other gentlemen with a great name that is completely unrelated and a financial planner. Then there is also my biological father who lives in California and is a felon. I am just waiting for the day that a case of mistaken identity with my biological father causes me some trouble.

Due to having a non-matching name on my identification I had to sign and initial an additional form saying I am really me. I think my votes are still counted but they were not clear if my vote could potentially be thrown out due to this technicality. I get the feeling that I might want to take a day off from work in the future and wait all day in line at DPS to argue with someone to add Jr. to my complete name. I am not looking forward to that in the slightest.

So as far as impact on me as a voter this change has caused me some inconvenience and doubt as to if my vote will really count. I also have some serious doubts that the process would really impact individuals performing any kind of actual voter fraud.

There are several ways someone could easily get around the system if they were already breaking the law. I also think that if someone were really trying to change the vote that election fraud and not voter fraud would be the more vulnerable source to attack. An insider on the election team for a precinct could more easily tamper with a single voter machine to change results than it would be to get a large enough physical presence of people to make an equal change. In addition the weaknesses in the ability to audit the machines would make it easier to avoid detection. So to me this is all just a waste of time and money and a pain for people like me and the elderly. So while my experience wasn’t terrible, it wasn’t great either.