The Nentir Vale is a point of civilization surrounded by wildlands. Long ago in the ages of Legends Past there were great kingdoms, cities and heroes that roamed the land. You (your character) may have even have even listened to legends that were said to have happened in the Vale. Those time were long ago and your life as a villager in Winterhaven has largely peaceful and mundane. Sure there are large families of both humans, dwarves and elves in the village but there is hardly anything legendary about them.

The walled village of Winterhaven is itself a small isolated farming community situated between the Cairngorm Peaks and the Cardbury downs. To the east is the town of Fallcrest. The people of Winterhaven are a tough, tight knit community that is suspicious of outsiders.

Start of an Adventure

The adventure will begin in the village of Winterhaven. The adventurers will be young men and women on the edge of reaching their rite of passage as adults. In Winterhaven all able bodied members of the village must be members of the militia called the Warriors Guild. When a person reaches adulthood they must undergo some basic training and may later be called up in a time of need by the Lord of Winterhaven. After the training is complete all celebrate in a feast recognising the the new adult member of the village. We will join the story as our young adventurers are preparing for this training and are excited about finally being considered adults. You might even consider on going on an adventure to see the town of Fallcrest to the east, before you have a family of your own and settle into village life. That might be what you are thinking but fate has larger plans for you.

Geography and History of Winterhaven

The rutted King’s Road leads to the foot of a broad hill that holds the walled village of Winterhaven. The village is nestled in the southern foothills of the Cairngorm Peaks. The walls are weathered stone topped by defensive palisades.

Small thatched homes stand around Winterhaven, each fronting a small piece of farmland or pasture. Beyond the farms to the west and south lie dark woods, and to the north, tall mountain peaks.

Most residents of Winterhaven have never traveled beyond the village vale. The majority of villagers are farmers, though the walled heart of Winterhaven employs various craftspeople as well. Wagons occasionally head east down old King’s Road from Winterhaven to find trade with the next village, which lies five days away. Sometimes wagons come into Winterhaven, causing the villagers to excitedly gather in the Market Square to hear news of the outside world and to buy new and exotic goods.”

Population: 977; With most living in the farms to the west and south of the village.

Ernest Padraig, the Lord of Winterhaven, is descended from the noble family that ruled the area under edict of the old empire. Folks around Winterhaven were happy with Lord Padraig’s fathers authority, and they have found answering to the rules of the new lord no more arduous.Padraig commands the Winterhaven Regulars, a core group of ten soldiers who perform guard and police functions in and around the walled portion of the village.

The population of Winterhaven is predominantly human, with a scattering of dwarf families, and a handful of individuals of other common races, including a couple of elves.

Winterhaven is primarily an agricultural village based on barter and trade, though Lord Padraig keeps a monetary system afloat with his own coin. Adventurers should have no trouble purchasing appropriate items for which they have sufficient coin. 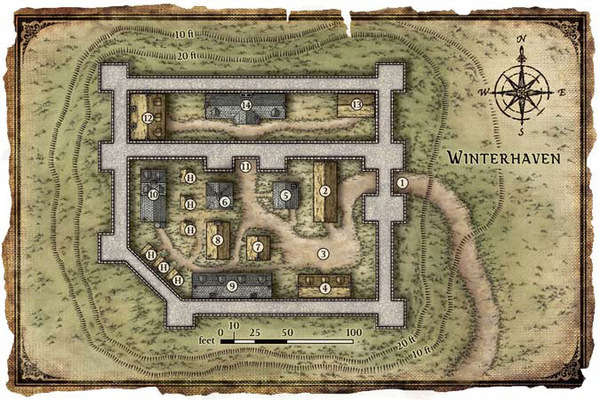 Open by day, closed and barred at night, the outer gate is policed by two guards regardless of the hour. They nod amiably to locals, and point travelers (whom they assume to be traders) to Wrafton’s Inn. Winterhaven’s walls have a narrow parapet extending around the inside edge.

This spacious inn and tavern serves as the public house for the region. Like alehouses everywhere, Wrafton’s Inn offers beer, wine, and, on occasion, spirits. Meals are served for those with the coin, and beds for travelers are available. A crowd of villagers gathers each night to drink, gossip, sing, and play games of chance.

In addition to village residents, any travelers passing through Winterhaven are found here. Wrafton’s owner and proprietor is a female human named Salvana Wrafton. She employs several waiters, waitresses, and cooks. Salvana is friendly and open, quick with a smile and a warm welcome.

Every other day or so, carts and wagons gather in the square and offer goods to the people of Winterhaven. Once each week, the official Market Day acts as a siren’s song, calling most of the villagers to shop and socialize in the square. Farmers sell produce, hunters hawk smoked meats, villagers sell crafts, and sometimes a trader from the east sells implements or costly goods.

On market days these stables are filled with mounts and other beasts of burden used by sellers to haul wares. Travelers can stable their mounts here for 2 sp per day.

A dwarf named Thair Coalstriker owns the village smithy. Adventurers can purchase a variety of mundane wares here, including spikes, weapons, heavy armor, and so on. Simple weapons are readily available, but military weapons require one day to complete, and superior weapons require a week of work.

This five-story structure is the highest building in Winterhaven. The tower is rumored to be over 300 years old, and Valthrun the Prescient is its most recent resident.

Bairwin Wildarson traveled the world, or so he claims, before setting up shop in Winterhaven ten years ago. He has a variety of items available for sale, including potions of healing.

Winterhaven villagers can join the Warrior Guild and train, once per week, in basic sword and shield skills. The guild trains in Market Square on days when the market is not open. Some citizens earn militia pay (a few silver pieces per year) by training at least once per month and being on call for emergencies. Rond Kelfem, captain of the Winterhaven Regulars, also oversees the Warrior Guild. He can be found here, in the barracks, or on guard duty, depending on the time of day.

The large tenement structure features apartments for the village residents who don’t own farms or who work in the businesses within the walls. Several families also live in the homes (buildings labeled H) on the west side of the village. Most of the villagers who live outside the walls are farmers and crafters who bring their wares to the Market Square to sell or trade.

This large stone structure is the village temple. Of the several deities worshiped by locals, Avandra, goddess of luck and change, is the most prominent. The temple priest, Sister Linora, runs services in the temple three times per week, but otherwise she is not often present. She prefers to travel among the homes outside the walls, dispensing care to villagers and animals and helping with various farm projects.

Winterhaven has a graveyard for which Sister Linora serves as caretaker. The graveyard is located a short distance south of the walled town.

This gate is closed and guarded by two Winterhaven guards during the daytime. They sternly regard anyone who approaches and question all who wish to visit Lord Padraig in his manor without an appointment.

Though it hasn’t happened in many years, on occasion Winterhaven comes under attack from bands of goblins, kobolds, or even gnolls. When such an event happens, the villagers seek refuge inside the walled keep and subsist on the supplies of water, flour, and other basic foodstuffs stored here.

This military-style barracks is home to Winterhaven’s ten professional guards, the Regulars.

The manor house where Lord Padraig, his wife, and their four sons live is a beautiful example of stone architecture in a village otherwise composed of thatch and wood.

The theme of these rules is playing with respect for each other. You’ll see that theme again and again. We are always open to feedback of any kind. Almost all the mechanical rules we use are standard D&D 4th edition.

Characters gain a level for every 10 experience points.

Characters receive 1 XP for each encounter, including “roleplaying encounters” and skill challenges. Usually, there is an average of 4 encounters per session.

Characters may receive 1 XP per session for a “roleplaying bonus” or quest bonus.