I thought would share my latest project upgrading my home server. I use it as a web server, Plex server, and file server. The old ones motherboard is going out and I thought I would do an upgrade to something with a little more power than the old one and add the capability that it could handle running a game server for my son or something.

It makes for a decent system on a budget for the planned use. I already had the hard drives and the rest of the components came to just under $300 before tax. 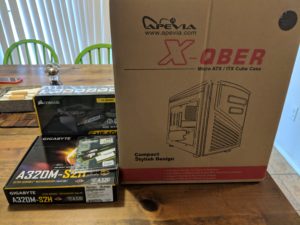