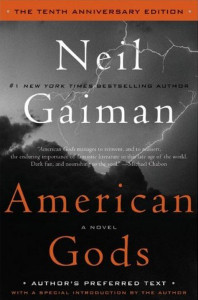 I recently finished the book American Gods by Neil Gaiman. The version I read was the 10th Anniversary Edition which is the authors preferred text. Overall I enjoyed the book and it’s different take mythology and religion in a fantasy setting. I can see how this book might have influenced some authors over the past ten years. One word of caution is that this book is not suitable for younger or sensitive readers. The book contains profanity and descriptions of nudity/sexual acts and violence. Some of my favorite elements of the book are:

1. It doesn’t answer everything. Some books have major unintentional plot holes… this book is not one of them. I’m just saying it doesn’t explain every plot point and the reader is left with minor questions and this is a good thing. Since the book deals with mythology and the supernatural I enjoy that everything is not explained enough to steal the magic from it.

2. The book is gritty. I don’t mean that the pages are dirty. I’m referring to the fact that element’s of real life aren’t skipped over. Hunger, thirst, pain and mundane stuff like needing to piss are parts of the book. It’s also nice that magic doesn’t solve everything while still being an element.

3. The “hero” of the story isn’t perfect. The protagonist starts off in a jail but is actually a “good” person comparatively. Shadow has many qualities the reader is brought to admire but the guy still screws up on occasion.

4. The book describes some real life crazy places. The House on the Rock and Rock City are both real places. At first I had thought they were complete inventions of Neil Gaiman’s mind. It’s often amusing to have real places used in story’s like this.

I’ve tried to share a few things without putting spoilers in there. If you have read the book, please tell me what you think of it?