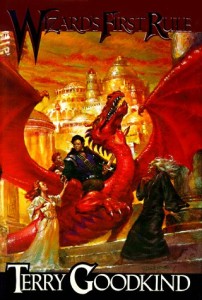 I enjoy reading fantasy literature and “Wizards First Rule” was a good addition. “Wizards First Rule”, written by Terry Goodkind, is the first book in the epic fantasy series The Sword of Truth. The novel was adapted to TV in the 2008 series Legend of the Seeker. People seem to either love or hate this book, so there is a 50/50 chance you will disagree with my opinion.

1. Warning!!! There are many adult themes in this book. I felt Terry Goodkind had a bit of a “split personality” disorder in the writing of this book. He would have scenes like in the beginning which presented a great deal of naiveté on the part of the protagonists. Then in other portions of the book he delves into very dark fantasy with graphic descriptions of or allusions to torture, rape, child molestation. I would not recommend this book for young readers even though the first few pages would make you think otherwise.

2. I felt the story moved along well and I was entertained in spite of it being a bit of an adventure on rails.

3. I thought some areas of the writing was a bit awkward. If you are a perfectionist this will drive you crazy. If you can cut the author some slack like me, then it’s just fine.

4. I actually like that the main character falls far before getting back up. It’s interesting to see how that develops his character.

Overall I would recommend this book to people who like fantasy novels and can deal with adult themes.