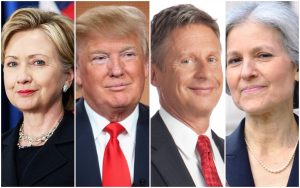 Let’s take another look at state-by-state polling and state voting history to get a good prediction for the 2016 election. I primarily look at the RCP average polling numbers but I also take into account polls they don’t use if data is lacking for a state. So taking all that into account, I now think Arizona, Florida, Georgia, North Carolina, Iowa, Ohio, Nevada and Utah are too close to call.

Notable changes from my last prediction include: Taking that all into account I think Clinton will get at least 273 electoral votes, Trump at least 158 and 107 electoral votes are still up for grabs. With Clinton still reaching 270 at a minimum, this would still place her in the White House. Trump would need to put another state in contention where Clinton still has a lead and gain that in addition to the eight other states I consider in contention to win. That is still a long shot for his campaign.

Now for the potential spoilers, both Governor Gary Johnson (L) and Jill Stein (G) will be on the ballot in most states in 2016. The Libertarian Party is on track to be on the ballot in all 50 states while the Green Party will be on many of them but missed crucial deadlines for states like Arizona. There is also a late comer in Evan McMullin (I) who can potentially make it onto 11 states ballots. In polls where Governor Gary Johnson and Jill Stein were included, the polling gap between Clinton and Trump narrowed. Johnson has been polling as high as 13% while Jill Stein has been polling at around 3-5%. This really only comes into play if Jill Stein can spoil a state for Clinton or Johnson gains enough momentum to take a state from Clinton like New Mexico, where he was a successful Governor. If that happened the election could potentially go to Congress where things would become very interesting.

The chances of Johnson winning a state have become much more difficult in the past few days, just coming of polling showing him a statistical tie for a state. If McMullin gets on the ballot in Utah, that could help the state go Democrat this election and further cement Clinton’s electoral lead. His candidacy would likely eat away at support for both Johnson and Trump in his targeted states.

Looking at McMullin’s candidacy, I think some of the Republican elite have looked and come to some of the same conclusions I have about Trump losing; while finding a way to twist the knife a little. This has a secondary impact of potentially suppressing polling for Johnson and making him miss that last couple polling points he needs to make the debates and try to put the brakes on any momentum he might build.

One thought on “Another Update: 2016 Presidential Election Prediction”