I was having trouble with my mouse sensitivity not being high enough even when set to maximum in the Chromebook settings. After searching around there were not many answers easily apparent so I asked on the Google+ Chromebook Community. A user there (KJ Kim) had the answer. I’m going to post it below so that if someone else is searching for the answer maybe my blog post will show up.

Also of note is the solution is not permanent.  You have to re-type the command when switching between different users and also when rebooting the same account. I rarely reboot my Chromebook so it is not too big of an issue. 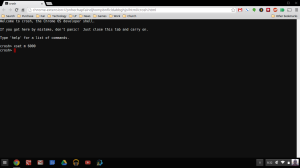