Skip to content
So the Bloodreavers don’t seem that tough. 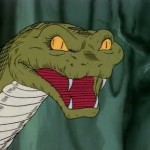 That is until you run into some that were just gambling and ill tempered. It doesn’t help that they have a pet snake the size of a person!!! So after some nasty bites and some swashbuckling over tables you finally defeat this group. Unfortunately the captives aren’t here but there are only so many doors left and you must be getting close. Before moving on Splug helps you skin the snake for future belts and he also cuts up some of the meat for a special non-rat meal. He insists the snake will taste like chicken after he cooks it.

In the next area you see a pair of doors. Behind one set you hear some loud 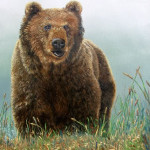 snoring. While peaking in you see that a bear is just behind the door. At the same time Shawna peaks into the other room and see’s a couple dwarves that have just placed a chest down. Shawna and Corwin charge the Dwarves while everyone else attacks the bear (Fluffy) that is now nuzzling through the other door. Behind the bear is a group of goblin archers that precede to cause your group some great damage. The bear while large is a big softy and the group defeats him after using some attacks to move him around. That’s about when the Krand the Hobgoblin Chief and the Hobgoblin Warcaster wake up and enter on the side of the battle of the dwarves… which are really Duergar… man those poison spines hurt. This is about when the battle starts to really heat up. The Duerger make tough roadblocks as the goblin archers rain down arrows any time someone stops in their line of sight. After a very tough fight you defeat everyone. 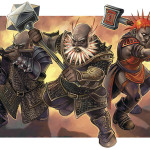 In this room you find some chests of treasure that was there in payment for the villagers. You also find a letter. The letter is written in Common and is a contract to purchase the Winterhaven slaves for 1,000 gp; it’s signed by Murkelmor of Clan Grimmerzhul. Of the villagers you see no sign.
2 XP for the evening.

Which brings you to 37 XP. You will likely achieve level 5 after the next game.