So after defeating the Orcs and Ogre you have a door to the North and a door to the East. As you are considering them Shawna shows up again. She has a change of hairstyle, new armor and tattoo. I guess you all figure she went to the Day Spa or something. After asking a bunch of questions and getting brought back up to speed, you decide to head east.

You listen at the East door and hear a dwarf ranting to a bunch of other dwarves. He is haranguing another person, using words such as lazy, unfit, and weak. He goes on to speculate that, if the clan wasn’t riddled with doubt and weakness, they wouldn’t be so beholden to the Mages of Saruun.

You all decide to break up his verbal assault with an assault of your own. Smashing into the battle two Duergar become large sized and an annoying one keeps casting his own version of a fireball and a poisonous clod. You also have a loud mouthed one that is really hard to beat down. After finally beating him down… you heal him back to consciousness and question him. You find out that he is Murkelmor the appointed leader of Clan Grimmerzhul in the Horned Hold. While questioning him you hear harsh, hissing laughter through the door to the North.

“Look, Durkkel,” one voice says. “It doesn’t like me! Should I be afraid?”

“It needs to learn some respect, Marshk,” another voice replies. “If I pluck out one of its eyes, it might think twice about glaring at you.” 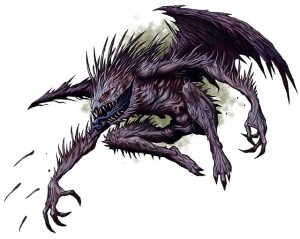 That’s about when Ket starts running to the door and telling the others to attack before he harms one your family members.

Through the door you see an expansive chamber that contains three large wells. One holds a pool of water, but two are simply deep pits with ladders leading down. A large brazier full of coals sits near a rubble pile in the southeastern part of the chamber. Three gray dwarves stand
guard here, along with two humanoid creatures with lashing tails and bodies covered in sharp spines.

The spine covered devils fly above the pits to try to rain attacks from relative safety but all the groups range attackers prove this to have been a false hope and combine fire to quickly kill them. The remaining Duergar while tough… are defeated without incident.

Inside the pits you find 14 slaves chained to the walls. Of them two are villagers from Winterhaven which are Sage (Lavender’s Brother) and Delia Greyrood (Sister to Lord Paedrag’s wife. There are also five towns people from Fallcrest and six from the Barony of Harkenwold to the south. There is also a bitter goblin that was sold by the Bloodreavers even though he was a member of their clan, just to pay some of his gambling debts. Of the Winterhaven villagers Dotty (Quinn’s older sister) and Rena (Ket’s sister) are still missing. After some questioning you find some out that Gnolls on behalf of Paldemar came and took the other two villagers away.

Returning back to the Seven Pillard Hall a small procession of children and townsfolk ask questions about the rescued slaves. You are able to find rooms at the Inn for everyone but while you stay for free they have to charge for the guests. The party collectively helps pay the stay for the rescued slaves. While the Inn is full the rescued goblin brings you a message, someone paid him to deliver.

Your actions against the duergar are commendable. I am in a position of power in the evil organization behind the duergar’s actions, and I wish to help you defeat my comrades. I have been seeking a way out of the organization, and I believe you can help me. Follow the attached map so that we can meet in secret.

The message goes on to ask you to arrive early the next morning.

To be continued the next game…

That brings your total to 48, bringing you close to level 6.