Your here to kick some Duergar and chew bubblegum and your all out of bubblegum.

Continuing on your storming of the Duergar fortress you start checking doors and then killing the occupants on the other side. In the next room it’s a surly blacksmith, his apprentices and some Orc thralls. While the blacksmith would have loved smashing your heads in, you did a great job taking him out of the fight. The more annoying part was his apprentices that kept cloaking after attacking your group but you all took them out also. After looting the room and bodies you moved on to the next area. 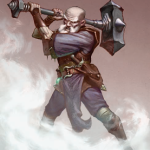 In the next fortified room you run across an ill tempered individual named Rundarr and his guards bossing around some human slaves. You don’t trust the slaves so you block the door. And precede to annoy the DM by completely locking down his BBG with dazes and immobilizing him. Oh and it really annoyed Rundarr also. He tried going giant size and hulk smashing but he just couldn’t get near enough to you all. While that is going on two Duergar try to sneak up on the back end of the group. Lavender acts as rear guard and keeps them pinned into the hallway with her pets and later Ket helps dispatch them. At the end of the battle you confirm that the slaves are in fact slaves from Fallcrest. You provide them an escort back to the Seven Pillared Hall and rest in the Inn.

In the morning you find Shawna’s room vacant. After a careful search, all you find is a dart with a tranquilizer on it. You all search the Hall and ask questions but can’t find any answers. You resolve that maybe the slavers took her in the night as revenge.

So you head back to the Horned Hold to kill some more Duergar and ask questions.

Getting back you find the portcullis blocked again. After some judicious use of fire, arrows and lock picking you storm back in. You carefully move through the fortress but meat no resistance until you reach a previously locked door. After sneaking down the hall past it you come to another door with arrow slits. Behind the door are two Arbalesters (steam punk like crossbow on mechanical legs) and some more Duergar. You smash through the defenders and cut, burn and shoot them to shreds. After killing all the Duergar, you loot the rooms and find more gems and magical treasure. 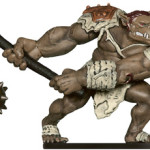 Moving on from there you hear someone speaking in the room to the north west. After running in you find a pissed off Ogre mad at missing the joke his Orc friends made. So he attempts to take the frustration out on you… it doesn’t go so well. Sure he has some reach but the FIREBALL, hail of arrows and other nastiness makes this a quick battle for you.

This brings your overall total XP to 45 and you are currently at level 5.