Fallcrest stands amid the Moon Hills at the falls of the Nentir River. Here travelers and traders using the old King’s Road that runs north and south, the dwarven Trade Road from the east, and the river all meet. The surrounding ridges shelter several small valleys where farmers and woodsfolk live; few are more than six or seven miles from the town. In general the people outside Fallcrest’s walls earn their living by farming or keeping livestock, and the people inside the walls are artisans, laborers, or merchants. People with no other prospects can make a hard living as porters, carrying cargo from the Lower Quays to the Upper Quays (or vice versa).

Fallcrest imports finished goods from the larger cities downriver and ironwork from the dwarf town of Hammerfast, and exports timber, leather, fruit, and grain. It also trades with the nearby town of Winterhaven.

The surrounding hills hold several marble quarries that once produced a good deal of stone, but the area has little demand for ornamental stone these days, and only a few stonecutters still practice their trade.

A small town built from the ruins of a larger city, Fallcrest is the crossroads of the Nentir Vale.

Population: 1,350; another 900 or so live in the countryside within a few miles of the town. The people of Fallcrest are mostly humans, halflings, and dwarves. No dragonborn or eladrin are permanent residents, but travelers of all races pass through on occasion.

Government: The human noble Faren Markelhay is the Lord Warden (hereditary lord) of the town. He is in charge of the town’s justice, defense, and laws. The Lord Warden appoints a town council to look after routine commerce and public projects.

Defense: The Fallcrest Guard numbers sixty warriors (see the accompanying statistics block), who also serve as constables. Moonstone Keep is their barracks. The Lord Warden can call up 350 militia at need.

Fallcrest’s Story
Up until four centuries or so ago, the Moon Hills and the surrounding Nentir Vale were thinly settled borderlands, home to quarrelsome human hill-chieftains and remote realms of nonhumans such as dwarves and elves. Giants, minotaurs, orcs, ogres, and goblins plagued the area. Ruins such as those on the Gray Downs or the ring-forts atop the Old Hills date back to these days, as do stories of the hero Vendar and the dragon of the Nentir.

With the rise of the empire of Nerath to the south, human settlers began to move up the Nentir, establishing towns such as Fastormel, Harkenwold, and Winterhaven. A Nerathan hero named Aranda Markelhay obtained a charter to build a keep at the portage of the Nentir Falls. She raised a simple tower at the site of Moonstone Keep three hundred ten years ago, and under its protection the town of Fallcrest began to grow.

Over the next two centuries, Fallcrest grew into a small and prosperous city. It was a natural crossroads for trade, and the Markelhays ruled it well. When the empire of Nerath began to crumble about a century ago, Fallcrest continued to flourish—for a time.

Ninety years ago, a fierce horde of orcs known as the Bloodspears descended from the Stonemarch and swept over the vale. Fallcrest’s army was defeated in a rash attempt to halt the Bloodspears out on Gardbury Downs. The Bloodspears burned and pillaged Fallcrest and went on to wreak havoc all across the Nentir Vale.

In the decades since the Bloodspear War, Fallcrest has struggled to reestablish itself. The town is a shadow of the former city; little trade passes up and down the river these days. The countryside for scores of miles around is dotted with abandoned homesteads and manors from the days of Nerath. Once again the Nentir Vale is a thinly settled borderland where few folk live. This is a place in need of a few heroes. 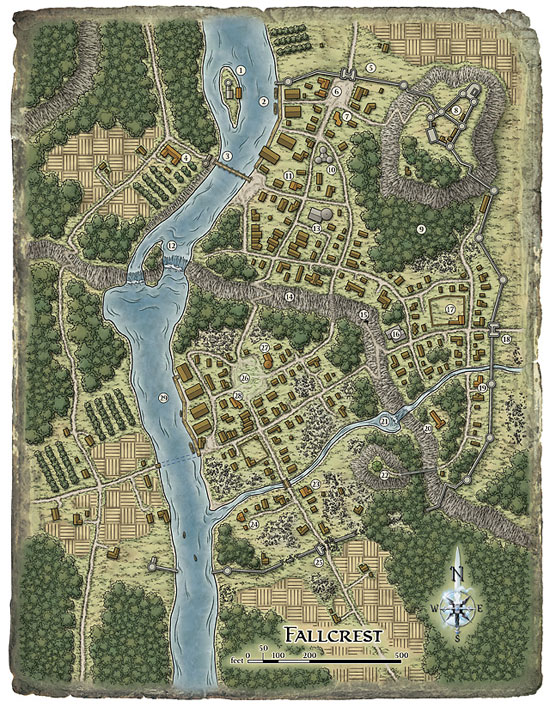