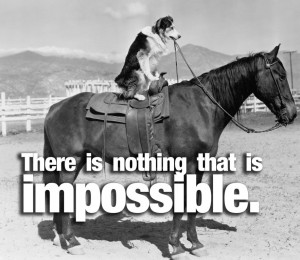 Sir Oris found us another person to join the adventuring company. He calls himself Belgerreth and is one of those Eladrin that has spent most of his time searching for something on the mortal plane. He also claims to be a Psion. I’ve always thought those were some variant of Sorcerer but I’ve never seen one up close to study. I’m going to watch and see if I can sense any arcane energy being put off by him when he is doing one of his tricks.

Sir Oris also set us up with some pack horses for the trip. Duke says he is glad to not need to carry any of my equipment. I passed the first day chatting with the ‘lost on land sailor’. I made a game of placing stones I shrunk down on his clothing during the day. I got to around a dozen before he got suspicious of me. He’s funny; so I will keep it to my funny jokes with him. It’s too bad I didn’t get a portable gaming board of some sort. Maybe if I gathered some stones and carved the symbols for lanceboard, Sir Oris and I could have a good game. We’ve been able to stop at an Inn each night so things have been comfortable so far.

We now have to leave the horses behind and walk on foot or in my case fly. Luckily Duke can still come along with us. He has a good ear for things, so he might be useful. The bad part is we won’t be able to take the Ale. Songammem will most likely be a lot more testy now. I have given the barrel to the last inn keeper. We only really needed it at the midday meal anyways and maybe the gift will build some goodwill. We had already consumed 2/3 of it anyways.. ((Pony keg =62-66 pints. Six party members would drink 42 pints in a week. Maybe more if any of the Inns lacked ale.)) 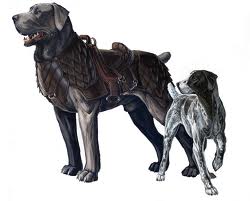 Traveling in this wilderness hasn’t gone too well. We lost part of our main supply of food. Why it wasn’t in bear bags… I have no clue. Other notable events so far has been Markus waking us up for a false alarm. I buzzed around him for that one and placed a few expanding stones. Duke has been a huge help so far. He has kept an ear open at night and is great at finding game on the trail. I think I might commission some leather armor for him when we get back to the city. It probably wouldn’t be the strangest request the armorer has gotten. Also of note Sogammem has taken off her mask now that we are in the wilderness. Everyone has taken it well. The mask isn’t there to really fool anyone. The mask is there to give most people a pretense for people to fit her in their molds of how they view things should be. People will normally happily ignore the uncomfortable if they have an excuse. Except that jerk at the Grey Griffin. I’ll make sure he gets dysentery sometime for picking on Songammem.

Today has been exciting. Sehadra happened on the trail of some hunters while she was out. We all gathered and went to investigate. The hunters decided to try to turn Markus into a pin cushion, so we slaughtered most of them. I tried to take a captive but he dodged into my rapier. Honestly, who does that? Luckily the others thought to take one captive. After some vigorous questioning, he told us Thomas Malore and his Crimsom Wolves have their encampment about a mile north. I have also determined Eladrin wasn’t using magic. I won’t tell him of my theory, that might make him more cocky. 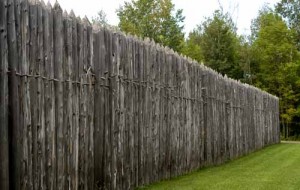 We found the encampment. They have a palisade 15-20 feet in height. It also has a gate with towers and some stone and mortar buildings. I had imagined a simple hasty palisade meant to slow a charge. This seems to indicate they have meant to stay here for some time. The others have asked if I could help them fly covertly over. I can make one fly every five minutes but that takes more time than I think we will have for an entry. It might be best to do some more scouting. Maybe have Markus get as close as he can, he can move pretty silent. He can probe for any under guarded points or other weak points. We could also have Songammem climb a tree. She is pretty athletic. She could draw a good view of the encampment. Speaking of trees we should grab a couple saplings and lash a simple ladder together. That will help some of them climb over. Then use a rope to slow decent on the other side. Songammem can nearly leap over if she wanted to. So only three of the party need use the ladder. A distraction would also be good. Maybe I should have Duke run to the other side and start howling, then sneak back around. I think I will go talk this over with the others right now.