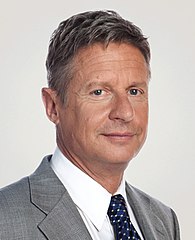 Johnson announced his candidacy for President on April 21, 2011, as a Republican,  on a libertarian platform emphasizing the United States public debt and a balanced budgetthrough a 43% reduction of all federal government spending, protection of civil liberties, an immediate end to the War in Afghanistan and his advocacy of the FairTax. On December 28, 2011, after being excluded from the majority of the Republican Party’s presidential debates and failing to gain traction while campaigning for the New Hampshire primary, he withdrew his candidacy for the Republican nomination and announced that he would continue his presidential campaign as a candidate for the nomination of the Libertarian Party.  – Wikipedia