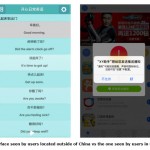 Threat: Pirated App Store client for iOS found on Apple’s App Store
Solution: Do not install software from unapproved third party app stores as the applications are riskware and some of the applications installed may contain malware.

An app called “Happy Daily English” available in the Appale App Store has been revealed to be a fully functional third party app store client. This new discovery shows some techniques that can be used to fool app reviewers and the programing language also allowed the application to be updated without approval from Apple.

The app developer also analyzed Apple’s proprietary protocols to implement some functionalities of Apple’s Xcode IDE to automatically generate free personal development certificates. So far the application hasn’t stolen any account information but has used it for analytical purposes. I recommend avoiding cracked software app stores as they are both illegal and often introduce vulnerabilities.