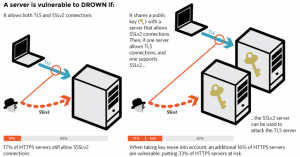 The DROWN attack targets servers that might not use SSL2 but still support it. Often this is done to support other servers that use it such as SMTP, IMAP, and POP mail servers. A DROWN attack could allow an attacker to decrypt HTTPS connections by sending specially crafted packets to a server or if the certificate is shared on another server, potentially performing a successful Man-in-the-Middle (MitM) attack.

You can find out if your website is vulnerable to this critical security hole using the DROWN attack test site.

Like many of these attacks, the fix is already out there. Server admins need to perform updates immediately to protect against attacks. In addition confirming all servers that use the same certificates are updated is important as this attack can compromise one server and be used on a “secure” server that uses the same certificate.