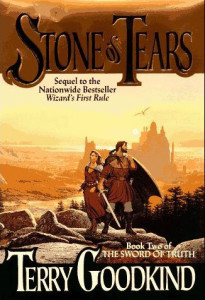 So I decided to follow up “Wizards First Rule” by reading the next book in the series “Stone of Tears written by Terry Goodkind. This is not a complete review. This is just a few of my thoughts on the book.

1. Warning!!! There are many adult themes in this book. Yes this is the same warning I gave for the last book but Terry Goodkind doubles down on the Dark Fantasy elements. I get the feeling I would not want to live in his fantasy world. It’s a very dark place were rape, torture and murder are highly likely and not necessarily in that order.

2. I read an eBook version. As others have noted the editors have done a horrendous job on pretty much any ebook version. There are several editing errors that I understand the paper books lack.

3. The book could have been named “Wizards Second Rule”. I won’t say any more on that to avoid spoilers.

4. It’s a long book. Most of the books I enjoy are around 1,000 pages so it’s about average for me. If you like shorter books, you might want to look at a different series.

5. I enjoyed the book well enough that I have now started on the third book in the series.