Helaman 1:24 “And supposing that their greatest strength was in the center”

I love how this little bit of information is missed on what ever Intel they had previously gathered. Making weak things strong is an important theme we see in these battles.

How can we apply this lesson to our lives? Well our lives aren’t in physical battle but we are in constant battle with Satan. He seeks to probe our weaknesses and destroy them. The answer is of course to make our weaknesses strengths as the Nephites did. What’s one of the weaknesses I work at? I’m terrible at naturally expressing feelings of love. This is a weakness I have identified before. I expect to say something once and people know that’s just forever. So to counter that I work on expressing my love to my family. In many small ways.

You have got to love the ominous foretelling that Mormon puts into the narrative here. Think… Mormon is looking around seeing how his civilization has fallen apart and and lived through his own sort of Apocalypse. He’s looking at this and saying “this is where it all went wrong”. This is where the destruction of the Nephites started.

What a small part of everything do we have from their records. In the surrounding scriptures they talk of cement work and ship building. I wonder what it was all like. The ships would be all rotted away but does the reference to cement really mean cement or does it mean clay or other work?

In Helaman 3:24-28 we see some of the prosperity of the church. Normally when I think of prosperity and the Nephites, I think of the temporal wealth and inevitable pride that comes before the fall in the pride cycle. In this case we are told of a great spiritual prosperity that goes on and the great growth of the church. Maybe the close brush with destruction in the earlier chapter humbled the people and brought them closer to Christ? At any rate, I think it’s also great to hear about the positive things that went on amidst these difficult times. I stopped at verse 28 because I love how it tells us that “we see that the gate of heaven is open unto all”. That sounds like a really pleasant invitation, if we just get up and choose to do what’s needed to walk through the gate.

What is the imagery from this scripture? Rock, Foundation, Mighty Winds, Storm.

I’m imagining a powerful storm beating on a home. Having lived in California I’m remembering images of Malibu and some other hill areas where million dollar homes were built on dirt. Or how most of the bay area is built on silt. In both areas they have had huge damage in storms or earthquakes. It’s a very practical reminder of why building on a strong foundation is important and helps me to remember the importance of a spiritual foundation. 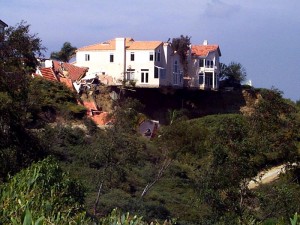 Don’t be this guy.

Voice coming out of the darkness to repent. I would be scared out of my wits. That’s a time to get on your knees and pray for forgiveness.

In Helaman 6:21-22 it talks about the secret signs used to distinguish brothers and to help hide their murders and thefts. This made me think of when I was a teen and lived in foster care. Many of the other foster children were in gangs or tagging groups and used signs of their own. They would use these signs to mark territory or to recognize someone from their group, much like the Gadianton robbers.

We still have crime today and gangs are an issue law enforcement is still working on but did you know that violent crime this year dropped from the previous year and that violent crime has dropped to 1963 levels? This has been a continuing trend from the early 1990’s. You wouldn’t realize that from the news. Most people I run into still think things are more dangerous today as opposed to safer. So take hope. If we keep working at opposing evil in the world, we are able to see success.

Helaman 7:5 corruption in government and justice

Well at least it’s not just us with corruption today… well that’s still not a good thing. This makes me fear what we potentially have to look forward to. Can this sort of corruption also spell our doom?

Helaman 7:23 “it shall be better for the Lamanites than for you except ye shall repent.”

That’s some more foretelling there. It’s not looking good for the Nephites. Some people say that the book of Mormon paints the Nephites as all good and Lamanites mostly bad but ultimately who did the Lord have survive? Those that were the least evil in the end.