So much happened in the village, it’s difficult to keep track.

As you came to the gates the Winterhaven Regulars stopped you and asked you to wait for Captain Kelfem. Captain Kelfem listened to your story minus mention of the spy in the village. He took procession of the prisoners and the ears. He also gave you a shiny corpral medallion for the squad to choose their own leader. Ket (Philips character) was chosen.
You were then brought before Lord Padraig who listened to your complete story. He gave you a reward and paid for a night at the inn to rest up. Ket was falling asleep on his feet but kept on with the rest of the group.

The group visited the shop Marcus (Kets uncle) runs. He haggled with you over the prices you wanted for selling items and sold you any non-magical equipment you needed. Money was shared out and some items were called dibs on. Ket proceeded to pass out on his bed (He hadn’t slept the entire time).

Everyone else got rooms at the inn and gathered in the common room for a meal and drinks. While there, the group questioned Valthrun about the ruined keep (where the cultists are) and listened to the tale about it. 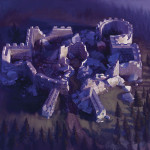 It was on a grisly night about eighty years ago that the
commander of the keep garrison, Sir Keegan, put into
motion the events that led to the keep’s downfall.
Perhaps the Shadow Rift’s malign influence is too
strong to resist. Maybe Sir Keegan was an insane monster
driven by demons we may never understand. Whatever
the case, at the stroke of midnight on that fateful day, Sir
Keegan began to systematically slaughter every resident of
the keep. His own wife and children were first to fall to his
blade, then his trusted advisors, and finally many of the
soldiers under his command. Sir Keegan was too skilled
for any one soldier to defeat, yet eventually the garrison
managed to respond with an organized defense. Although
many brave soldiers died, they managed to drive the mad
knight into the passages beneath the keep and finally dispatch
him.

The keep became notorious for a time. As one of the
last bastions of the fallen empire, there was no one to
order it back into service. So, it was abandoned, feared for
a time, and eventually, more or less forgotten. An earthquake
a few years later collapsed the upper towers and
walls, and turned the place into a ruin of tumbled stone.
Rumors persist of great treasures buried beneath the
keep, yet few have dared explore the passages over the
year. Sir Keegan’s ghost is said to roam the corridors
beneath the ruins, wailing in grief over the tragedy of his
life. The people of Winterhaven avoid the place, and the
mere mention of Shadowfell Keep is considered bad luck
by many of the farmers and villagers.

After hearing the story the group moved on to Ninaran and began questioning him. While talking Shawna (Didi) decided to rifle through his backpack and then his cloak. He caught her when it came to the cloak and opened fire with his crossbow on the group. Mathos charged in with the battle cry, “I have never been more drunk!” While he fought hard, the group prevailed and knocked him unconscious. You found a note on him that said, “Get better results or else your family will regret your failings.” The group tied him up and left him for questioning in the morning.

At four in the morning Ehlonna (Lavender’s Mom) and several other members of the Women’s Circle woke Ket and brought him to the Inn’s Common room and woke everyone else. They spoke to you about visions of great magic and heroes of legend returning and being dumb founded why all of you were chosen, yet you were. They questioned Ninaran and verified that his family was captured and that he was distraught and forced to spy on the village. They had stripped several magic items off of him that was shared out with the group. Some of the group voiced guilt over it but still took the things anyways.

The women’s circle then sent the group off after the cultist and warned of a calamity if you don’t destroy the cultist soon. By evening you arrived in the area of the Keep and camped off of the road to rest for the night before heading in.