This D&D campaign takes place in a modified form of the “Points of Light” background. There is a large amount of information spread across several books about the immortals. Some of it is intentionally contradictory so that there is no one right answer. As a brief overview there are five primary types of immortals in this universe which include the Divinities, Primordials, Primal Spirits, Far Realm Entities and Archfey. There was an event called the Dawn War in which the Primordials and Divinities fought. Ultimately the Divinities became dominant and saved the The World from destruction. The Immortals now stay in their own planes of existence. When in the mortal World any Immortal can be killed. So Immortals normally work through followers in the mortal world such as Clerics, Paladins and other chosen followers. I have already had a few Immortals meddle in some events but I have not connected all the dots yet for you. The following is a brief description of some of the Immortals and the Planes.

Most dwell in their Astral Dominions in the Astral Sea. At the height of the hierarchy are the Gods themselves. Under them are their Exarchs and Archangels.

The Nine Lords of Hell

These creatures of destruction dwell in the swirling maelstrom of the Elemental Chaos, beaten back by the gods in the Dawn War.

Vile entities that once presided over a dying universe and introduced the shard of evil into the Points of Light, and who now pose as demon lords in their quest to conquer the multiverse.

Dwelling in the World, these powerful spirits called an end to the Dawn War. Most of these spirits’ names are found only the description of powers of Primal classes.

Bizarre alien creatures from beyond reality, they infect the world with madness. Little is known about these creatures.

Lords of the Feywild, these creatures govern the capricious world of the fey.

4th edition uses a simplified default cosmology with only six major planes, each of which has a corresponding creature origin. 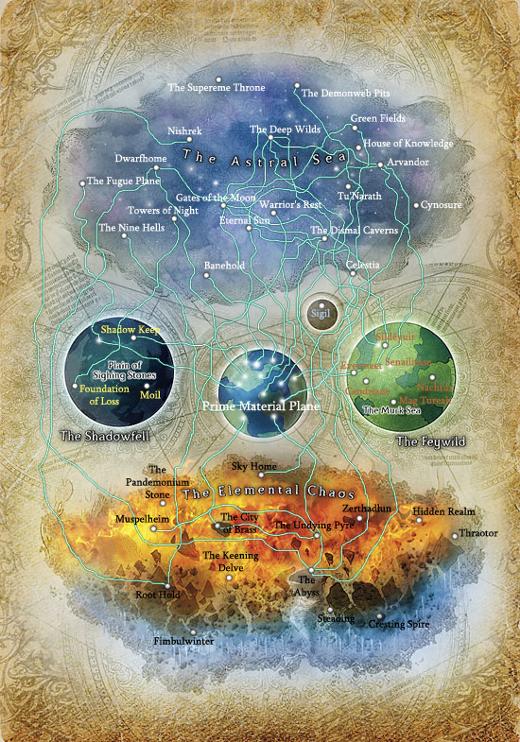 Astral Dominions in the Points of Light setting:

Locations within the Elemental Chaos:

The equivalent to the Prime Material Plane or Material Plane of earlier editions. This plane lacks a formal name and is most often referred to as the World, although titles such as the Middle World and the First Work were also presented in Manual of the Planes. Creatures native to the world generally have the natural origin. The gods Avandra, Melora and Torog have their homes in the World. The god Vecna wanders the whole cosmos (Sehanine is prone to doing this as well).

One of the two parallel planes, the Feywild is a more extreme and magical reflection of the world with some thematic links to the Positive Energy Plane and the Plane of Faerie of earlier editions and settings. Creatures native to or connected with the Feywild generally have the fey origin. According to the 4th edition Manual of the Planes, this plane has some sort of unspecified connection to Arvandor, and is suspected that the Dominion of Corellon can be reached by here. Important locales within the Feywild are known as Fey Demesnes.

The Shadowfell is a type of underworld, and the thematic successor to the Negative Energy Plane and Plane of Shadow from earlier editions. The Raven Queen makes her home here rather than the Astral Sea. Creatures native to or connected with the Shadowfell generally have the shadow origin.

Demiplanes are relatively small planes which are not part of larger planes. The most prominent demiplane is Sigil, the City of Doors.

Anomalous planes are planes which do not fit into other categories. The most prominent of these planes is the Far Realm.

An anomalous plane, the Far Realm is a bizarre, maddening plane said to be composed of thin layers filled with strange liquids. Visitors to the Far Realm can only exist in one layer at a time, but large Far Realm natives can exist in multiple layers at once. Creatures native to or connected with the Far Realm generally have the aberrant origin. A crystalline structure connected to the Far Realm, known as the Living Gate, stands in the Astral Sea. Creatures such as the Beholder or the Gibbering beast are very corrupted by these realms.