When I die this is the way I prefer to go. As I understand it when prophets walk off like this it is to be translated directly. That seems much nicer than the normal process of death.

I went back to note on this after another student mentioned it. I think Christ had a bit of a different birth and was connected to the body later than others.

This is an interesting scripture. The Lamanites became lighter after becoming righteous. I wonder why the Lord doesn’t do this today. Has it been too long for the symbol to matter in this way?

I found it interesting that among the Nephites they had a custom to choose someone that had the gift of revelation and prophecy (3 Nephi 3:19). I wonder how that would change things today if we had men of similar qualities in similar leadership positions? We definitely wouldn’t have some of the scandals that have occurred in recent years with some of the military leaders in the US. I wonder what the US government would look like 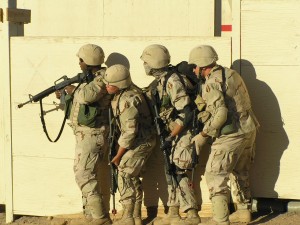 if we had more leaders with genuine faith and integrity? I could imagine the gift of inspiration and prophecy must have been a great strength to those Nephite leaders.

I’ve had to wear armor several times in my life. This was a picture from some pre-deployment training before I went to Iraq. It can be a pain to wear but it will protect you. This also makes a good spiritual story if you relate it to wearing the whole Armor of God.

As a past logistics guy in the Army I love this. You can only go so far living off the land. As Napoleon said “An Army marches on it’s stomach”. The foresight and planning ultimately helped the Nephites to success.

We should pray for success in all we do. Even if it is grim work. It almost seems like they were praying for forgiveness for the slaughter they would soon be forced to give to the other armies.

Here I thought that sort of phrase was just a Texas thing. I see that phrasing used for any sort of homicide in the news here. I guess this is one example that capital punishment is justified in some instances.

In chapter six we are reminded that the Nephites could prosper continually if they did not fall into transgression (3 Nephi 6:5). What a great blessing and how quickly was that blessing squandered. This was said just a few verses before pride, boasting and riches began to lead to another fall. How quickly the pride cycle starts sometimes. How can we avoid falling into this same trap today? We are also promised many great blessings if we don’t fall into iniquity. To answer my own question I think the falling into iniquity is a much more personal thing now days. We don’t see the large groups of the church falling away but we do see some individuals fall away. Some of the things I think that will help us most to stay away from transgression are the simple things. Prayer, reading our scriptures and avoiding even coming close to temptation are all things that can help preserve us from destruction.

How can someone be so hard hearted that when they hear the truth with power, they still turn away. This is when you repent and say sorry and change your ways. Not a time to be angry and revile against the Lord.

Not having the sun rise would be pretty disturbing but not having the ability to even light anything would be even worse. I’m pretty prepared with flashlights all over the house for emergencies. I imagine if I had been a Nephite, I would have had tinder and fire-starters prepared in a safe place. To not even be able to use those types of tools would have been pretty disheartening. Having to use only voice and touch to find others would have been difficult. I can’t even imagine how difficult it would have been to comfort my son in that sort of situation.

So the Lord has come and is now teaching. I find it interesting that one of the first principles he teaches is about baptism and the manner to do it. It seems like he is going through the missionary discussion principles and expounding on some parts.