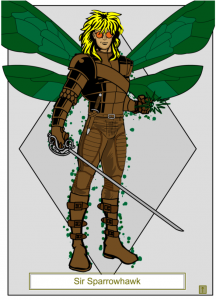 Last night I wanted to make a character portrait for my character “Sir Sparrowhawk” and I found myself missing the City of Heroes character creator. For those unfamiliar with the now defunct game, players could create very detailed customizations to the look of characters. It was unlike any other game I have seen before or sense.

So last night I went looking to see if anyone had a website that would do a similar job for those that aren’t artistically inclined, like myself. I ran across Hero Machines 2.5. The website also had a 3.0 version but I haven’t dived into that yet. As I started into it I was able to create a nice little portrait. I will have to see if I can make the wings a little more translucent in the future. For the look, I was drawing heavily on inspiration from several 1980’s movies.